The Basics of Creating Effective Teams

We've all worked on or led teams in the past with varying outcomes. Maybe the results were positive, where everyone aligned around a goal and respected each other's decisions. More commonly, teams are broken from the start and fail to achieve much of what they set out to accomplish.

Teams will always be an essential ingredient in building and sustaining a successful business. But creating great teams doesn't just happen. It takes planning and ongoing effort to make them effective - and keep them that way.

The Importance of High-Functioning Teams

There's a common misconception that all you need to do to create a "high performing" team is to find a bunch of smart people and toss them together. This generally doesn't work. MIT's Alex Pentland released a study concluding that teams of high IQ individuals that were poor team players consistently under-performed teams of average IQ individuals that worked together well on a team.

Google even went so far as to get rid of all of its managers in 2002 in a bid to prove that they were irrelevant. They were wrong, and chaos ensued. The company quickly brought the managers back and found that these positions were not only critical to clarity and structure, but also for team performance.

Businesses appreciate financial incentives, and effective teams provide those as well. According to a new book by partners from McKinsey & Company, organizations that have a top team working together toward a common vision are 1.9 times more likely to have above-median financial performance.

A Majority of Teams are Dysfunctional

Building and maintaining teams is tough, but it's necessary. According to an EY (formerly Ernst & Young) survey of over 800 business executives, teamwork in today's environment is vital. Specifically, 9 out of 10 of the companies surveyed state that the problems confronting them have become so complex that teams are essential to deliver effective solutions.

But studies also show that most teams don't function as intended, if at all. Stanford University professor and author Behnam Tabrizi reported in the Harvard Business Review on another study of 95 cross-functional teams in 25 leading corporations. The study found that 75% of the teams were dysfunctional, failing on a list of three out of five criteria:

Teams can be dynamite when they work, but a virtual disaster when they don't. Leaders and specialists come together from different business and professional perspectives, such as lines of business, product, or functions. They may feel the need to vie for influence and resources, all the while believing that their unique perspective is the thing that is going to create a turning point for the group. Maneuvering behind closed doors and forming factions aren't the characteristics of a healthy team.

Likewise, some teams get along so well that innovation is next to impossible, and tough issues are never addressed. If your organization has one or more of these "love fests," it's time to make some changes.

And then there is the "team" in name only. Members have loyalty only to their manager, and team meetings are for status updates only. There is little to no shared perspective or connection among team members.

"No matter how brilliant your mind or strategy,
if you're playing a solo game, you'll always lose out to a team."

This is an important point to internalize as a leader. But the necessity of approaching teams methodically can't be understated.

Capable, ambitious, energetic people are always a plus, but these roles often represent different products, lines of business, functions, and geographies that might be vying for resources, influence, and promotions. Likewise, digital technology has reshaped how work gets done as traditional boundaries continue to blur.

You'll find no shortage of advice on building effective teams, but here are several ideas around team composition and dynamics that continue to produce positive results in today's business environment.

If you're creating a team, you must have a reason. Not all teams are created for the same purpose. An executive team is tasked with managing an organization while a new product team is only meant to develop fresh ideas.

Clearly define the purpose of your team, including the overall outcome that you expect it to achieve. Ask yourself these questions:

Providing inspiring and clear vision sets the foundation for your team and helps guide the direction of the group as it works through decisions and challenges.

The most effective teams are carefully composed with an eye towards team size and diversity. Let's look at the size of your team first.

Contrary to popular belief, bigger teams are not better. In a now-classic social experiment, French professor Maximilien Ringelmann asked two groups of people to pull on a rope. In small groups, people put a good amount of effort into tugging on that line. But those individual efforts diminished as more and more people were added to the groups. Now called the Ringelmann Effect, this has been replicated in other studies, and proves that smaller groups elicit better individual participation.

Even Amazon's Jeff Bezos has a two pizza rule philosophy for the size of his teams. According to Bezos, if you can't feed a team with two pizzas, it's too big.

Who is on your team matters just as much as its size. If possible, get participation from different departments to bring varied perspectives and experiences to your project. Further, countless studies now show that diversity in teams is the best way to produce innovation and superior results.

"When two men always agree, one of them is unnecessary."

There is no shortage of real-world examples of innovation and success born out of diversity of ideas and background. Steve Jobs and Steve Wozniak were a team of opposites that came together to change the world.

App developer Cloverpop studied over 180 teams across various companies. It found that, while diversity can increase friction by 15%, inclusion in teams (gender, age, geographic diversity) boosts results by 60%. The worst thing you can do is have a non-diverse team deciding what a diverse group is going to execute.

Once your team is assembled, it will need a leader and some guidelines. To keep things respectful and productive, it's important to set up ground rules and enforce them.

Getting the right people on your team is an excellent first step, but they need some direction. Leaders are responsible for creating a clear map to the finish line. In other words, where are we going, and what resources do we have to get there?

Create a shared scoreboard that will offset the tendency of team members to create silos or smaller tribes within the group. When there is a singular goal that you are tracking, it creates a greater sense of "us" on the team where all decisions will relate back to that metric. 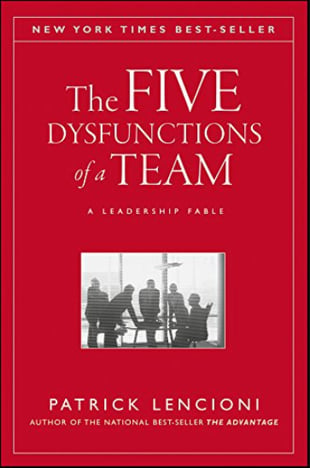 In his bestselling book, The Five Dysfunctions of a Team, author Patrick Lencioni says that dysfunctional teams suffer from a fear of conflict, absence of trust, avoidance of accountability, inattention to results, and lack of commitment. That's quite a list, and much of this can be addressed by placing emphasis on team culture and participation.

Put any group together, and it's going to develop a unique culture. It would be better if you were proactive and set some rules of the road about how team members will work together.

You can dictate these or have the team establish them upfront. Some examples are:

If team members aren't accountable or if not much is being achieved, something needs to change. Successful teams stay on track and produce results. There should be a regular review of the group's performance through team meetings and one-on-one catch-ups when needed.

As much as possible, try to let the team work through its own challenges. When it can push through obstacles on its own, it will become more confident and cohesive as a group. Likewise, don't forget to celebrate the successes.

Building effective teams is one of the most important responsibilities of any leader. It's not something that will be achieved instantly. While simple in theory, this is an ongoing process that requires constant attention and evaluation.

Swift HR Solutions works with leadership teams nationwide to build organizations that produce superior results. We provide strategic consulting and team development services to help your business align its talent, leadership, and culture. Contact us today to learn more about how our flexible services can help your organization achieve its goals. 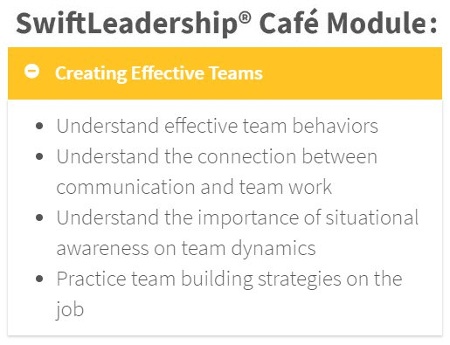 SwiftLeadership Café has an entire menu of choices to enable your organization to create your own internal leadership development program. Each module is 30-60 minutes in length, allowing practical leadership tools to be developed within the organization without taking time away from your day-to-day business.